Recent high temperatures and some reduced flows have slowed things down a bit on some of the rivers and streams in the Flat Tops, but the action remains solid overall. We’re starting to feel the touch of fall in the night air, so water temperatures should drop and trigger more activity.

The White River is often regarded as consisting primarily of private water. While there are large sections of the White both above and below the confluence that do require access to private land, the perception that no public water exists is far from accurate. Below the confluence, several public access areas have been established by Colorado Parks and Wildlife. Above the confluence, several miles of public access is available on both the North and South Forks within the White River National Forest.

The North Fork of the White River produces some very nice cutthroats, rainbows and whitefish; many in the 16-20 inch range.  Downstream, toward Meeker, 24 inchers are not uncommon. Closer to Trappers Lake, the fishing for brookies is generally excellent.

Access on the North Fork is somewhat limited, but the public water within the forest boundaries is not heavily fished. Stop in to the lodge and we’ll point you in the right direction. Be sure to respect private property boundaries. Most are well-marked.

The South Fork of the White River offers more public access than the North Fork, especially for those willing to do a little walking. The South Fork Trail (#1827) follows the river for about 24 miles.  The trail is an easy to moderate walk and is well-traveled by hikers and horseback riders, but most fisherman don’t venture more than a few hundred yards from the campground, so don’t be deterred if the trailhead parking lot is busy.

The water levels on the South Fork have dropped more than what we’ve seen on the North Fork and the action has been slower. Conditions improve the further you move upstream, so hiking up the beautiful South Fork Trail is strongly encouraged.

Marvine Creek is accessed via the Marvine Trail (#1823). The parking lot at the trail head is often full of vehicles and horse trailers, but the creek receives very little fishing pressure. If you’re look to fill a pan full of brookies for dinner, Marvine Creek is a wise choice.

Marvine is always a great option if you’re just looking to see a lot of action on dry flies. You aren’t likely to pull in a 20 incher, but you will have a great time.

Trappers Lake offers a great opportunity to land a large native cutthroat. The cuts have moved out into the deeper, cooler water. The action from the shore is slow at best. A float tube or a canoe will really be the only way to go for a couple of weeks. Scuds and wooly buggers with some sink are your best bets during the day. Early and late in the day, you might throw a caddis imitation.

Be sure to familiarize yourself with the special regulations for Trappers. Only artificial flies and lures are permitted and the number and size of cutthroats in possession is restricted, but keep all of the brookies you’d like! The lake sits within the boundaries of the Flat Tops Wilderness, so motorized vehicles and watercraft are prohibited.

Vaughn Lake is an excellent little lake to hit early in the morning or late in the afternoon (we recommend a cold beverage for late in the afternoon). This is a great location to cast from the shore using dry flies. Fish are consistently rising for hoppers, caddis patterns, PMDs and callibaetis. Please take note of the special regulations for cutthroats on Vaughn Lake and Poose Creek. Poose Creek is artificial only and all cutthroats must be returned to the water immediately.

Big Fish Lake is reached using the Big Fish Trail (#1819). The Big Fish Trailhead is on the left as you enter the Himes Peak Campground. The campground is on the Trappers Lake Road 6 miles from the intersection with County Rd 8. The trail sees some heavy use in the summer months, primarily by horseback riders.

Shamrock Lake and Mirror Lake offer beautiful settings to pull in brookies all day long. Both lakes are accessed via the Mirror Lake Trail (#1821). Virtually any caddis or mayfly patterns (#18-#24) are bound to bring fish to the surface. These lakes are great to reach via a trail ride with Ripple Creek Lodge. We’ll pack up your gear and a sack lunch, put you on a horse and one of our guides will take you to these beautiful, remote lakes.

What our guests are saying…

First off and on behalf of Tim, Jeff and myself, I wanted to thank you again for an excellent adventure we had while staying at your lodge and camp.

Per your request, I am sending you a short fishing summary, both for the North fork of the White River and Upper Island Lake.

North Fork of the White river:

Although temperatures that day were in the upper 70s and lower 80s, the water in the river was cold and clear. Tim and I mostly fished on top, typically with a double dry rig. We used hopper patterns, stimulators, and elk hair caddis.

Jeff used a double nymph rig and also caught a reasonable number of fish. Copper John and RS2 seemed to be good patterns.

We mostly caught cuttbows, with the occasional brookie, and one really nice Colorado cutthroat (picture below). Probably the biggest fish on the day. All were in the 10 to 18 inches range.

Flows were probably around 150cfs and river was crossable, with caution as the bottom was very slippery. Access to the river was ok, some bush wacking was needed in places.

This was about 7 miles below your lodge. 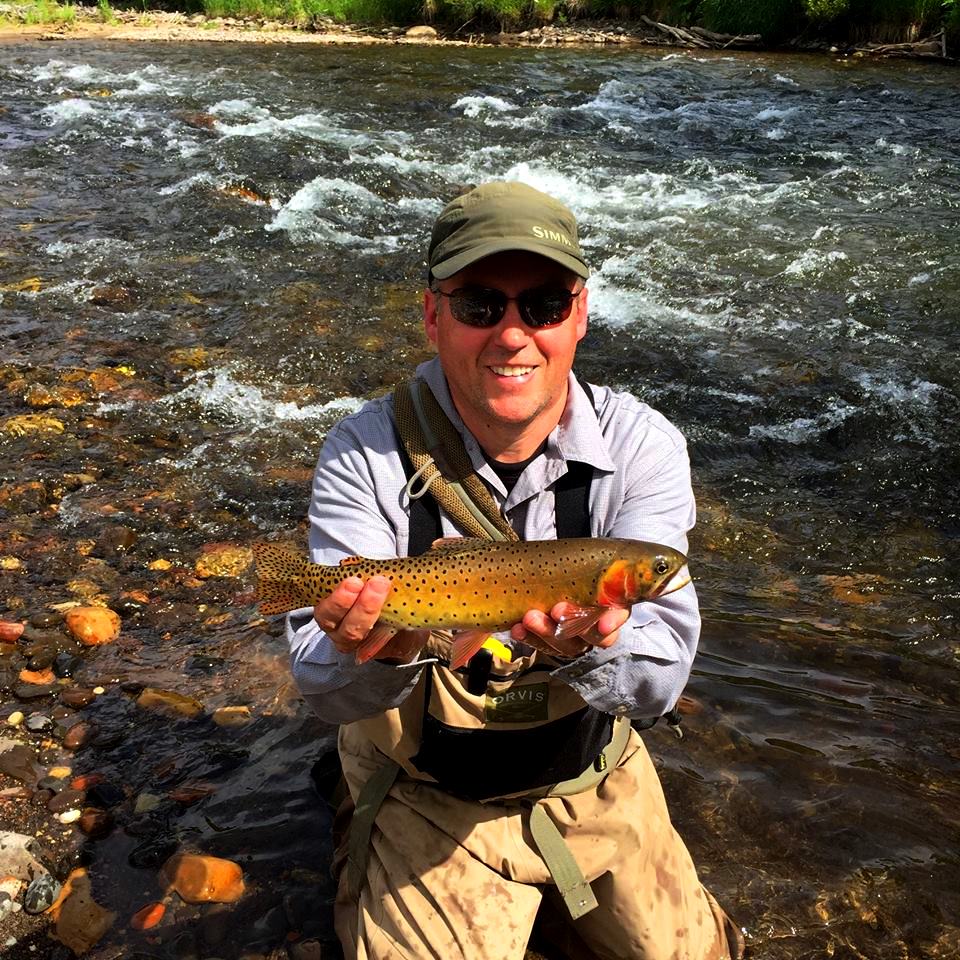 With no activity on top, we switched to #10 Slimp Busters in black and all managed to catch fish. All were Colorado cutthroat (attached). While we did not land more than a combined 10 fish, all seemed to be healthy and consistent in size between 14 and 18 inches.

It is was interesting to note that water temperature was higher than expected, probably close to 60 degrees, especially in the more shallow portions of the lake.

Also of note is that lake water level had already dropped by about 3 feet.

I fished the lake to the north of the camp but there seemed to be no fish in there. Same for the smaller lake directly south of Upper Island Lake.

We never ventured down to Island Lake as it was not really visible from camp. Looking at a map, it may have been worth the hike down there, had I known it was there.

Hoping this is helpful and wishing you an excellent hunting season. 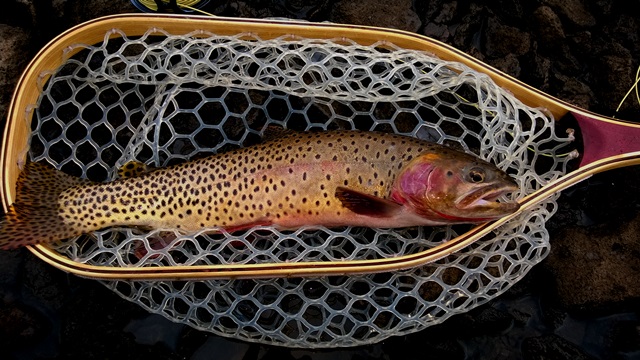